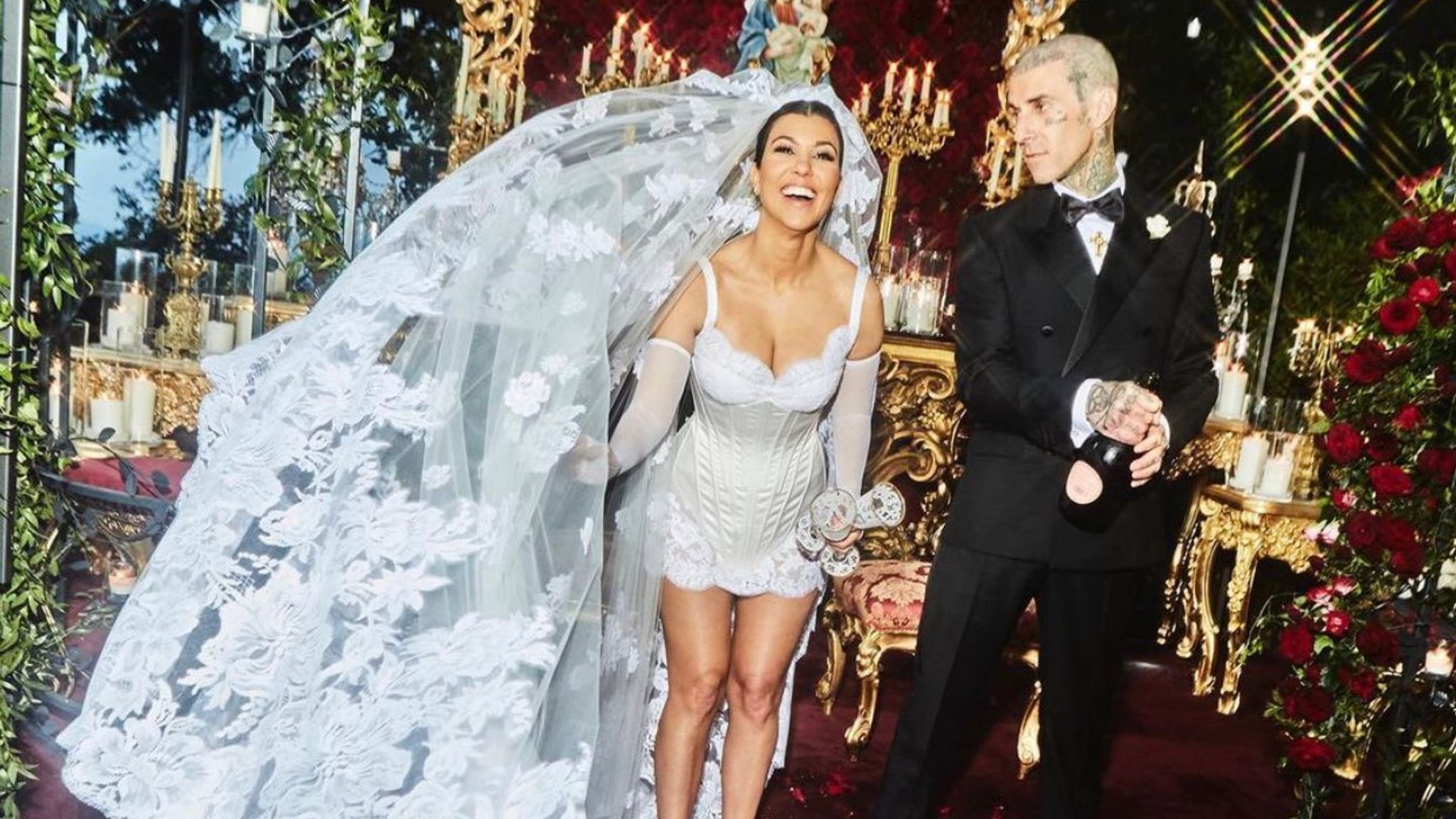 A Testament of Love Veiled by Dolce & Gabbana’s Hate-filled History.

Kourtney Kardashian and Travis Barker’s third wedding on Portofino’s beautiful Italian Riviera coastline unleashed a wave of love and hate. The beautiful couples’ happily ever after has been followed by harsh comments surrounding their Gothic wedding aesthetic. While their social media followers have spread wishes and congratulations, tabloids have characterised Mrs and Mr Barker’s special day as a ‘Carnival of vulgarity featured bizarre funeral-style dresses and a veil depicting the Virgin Mary’.

The contrasting opinions linked to Kourtney and Travis’ wedding are predominantly centred around whether the wedding’s décor and outfits were tacky or iconic. So perhaps it would be wiser to address the arguably distasteful wedding host, Dolce and Gabbana.

Dolce and Gabbana is a luxury Italian fashion house founded in 1985 by Italian designers Domenico Dolce and Stefano Gabbana. The brand is known for its elaborate floral and cheetah prints, lace and embroidery. Yet, we often forget that the brand is also draped with scandal and embellished with sexism, homophobia and racism.

In 2007, a Spanish advertising campaign was heavily scrutinised for glorifying gang rape. The ad depicted a woman being held down by a man while three other men observed. After severe backlash from the Spanish Labour and Social Affairs Ministry, Dolce and Gabanna removed the ad; however, this was not an act of remorse. On the contrary, the designers commented on the Spaniard’s reaction as “a bit backward.”

Several years later, the evident sexism illustrated by Dolce and Gabbana left a lasting aftertaste of disgust amongst the public. Feminist writer Louise Pennington branded the ad as representing an “Increasingly misogynistic contraction of women in the fashion industry demonstrating very clear links between the fashion-beauty industry and the mainstreaming of pornography. Those who suggest this image is harmless fail to recognise the reality of rape culture and the dehumanisation of women’s bodies in our pornographic mainstream media.”

The Kardashians are also known for triggering controversial topics amongst the feminist community. For example, some women believe that the Kardashians encourage women to sexualise themselves. In contrast, others applaud them for taking control of a narrative that men have already written for women and reclaiming the agency of their bodies.

Another scandal in 2015 broke out, and 300,000 + tweets with the hashtag #BoycottDolceGabbana circulated on Twitter. Domenico Dolce and Stefano Gabbana’s homophobic comment during an interview with the Italian magazine Panorama sparked outrage. The Italian designers said they oppose gay adoption and that “The only family is the traditional one”.

In addition, the controversial designers made an insensitive comment about in vitro fertilisation (IVF) and surrogacy by saying, “No chemical offspring and rented uterus: life has a natural flow; there are things that should not be changed”. Celebrities such as Elton John expressed that they would no longer flaunt the brand on social media. Considering Kourtney and Travis have started their own fertility journey together, their alleged sponsorship with Dolce and Gabanna is highly questionable.

In 2018, Dolce and Gabbana released a film as part of their ‘DGLovesChina’ campaign perpetuated Asian stereotypes. The film included an Asian woman eating Italian food with chopsticks; a mocking voice in the background said, “let’s use these small sticklike things to eat our great pizza Margherita”. Instagram influencers expressed their disgust by sharing posts demanding that the public boycott the brand.

This controversial incident ignited further retaliation toward Dolce and Gabbana. Diet Prada uploaded a damning post that included messages sent by Stefano Gabbana allegedly calling China an ‘Ignorant Dirty Smelling Mafia’. As a result, Dolce and Gabbana filed a lawsuit against the social media watchdog Diet Prada and issued a public apology. However, an apology did not suffice; Dolce and Gabbana lost $780 million in revenue as retailers removed the brand from Chinese e-commerce platforms.

Racially rooted stereotypes repeated in the media become a part of how people view and speak about social groups and identity. Unfortunately, turning a blind eye to the representation embedded in the fashion industry does not prevent them from having a damaging effect in the real world.

Overall, a day that celebrated the unifying love of Kourtney and Travis was arguably also a chance to resurrect Dolce and Gabbana’s reputation. After being outcasted from the fashion industry, Dolce and Gabbana have tried to make amends for their past mistakes by utilising their resources for charitable projects. Since 2018, celebrities have slowly started to showcase the designer brand on the red carpet; but the public’s opinion is divided on whether the Italian designers are off the hook.

Whether the brand has been held accountable for its mistakes is a personal choice. But it is not the first time that the Kardashian’s intentions to promote a brand have been scrutinised. However, it is essential to acknowledge that while it is easy to judge influencers for their choices and shift blame, we should reflect on whether we are guilty of walking down an aisle of ignorance and hypocrisy. Do the clothes that we buy and brands we follow on social media represent a hateful culture? Maybe there are a few brands we all should divorce.