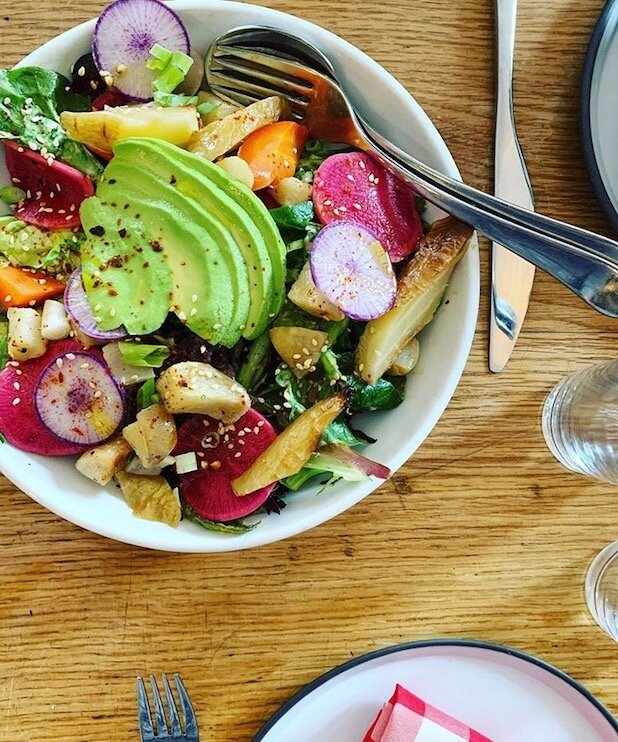 Lighthouse: An Eco-Responsible Restaurant Of Many Flavors

A flavorful dining experience awaits visitors to Brooklyn, New York’s Lighthouse. But that’s not all. The eatery proudly adheres to a philosophy centered on food sustainability and responsibility.

Naama Tamir, who, with her brother Assaf owns Lighthouse, summed up the ideology that defines the restaurant, which just celebrated its 10th anniversary. “We had been working in the hospitality industry for over 10 years,” she said. “We opened Lighthouse across the street from the apartment building we lived in at the time. We opened the (type of) neighborhood restaurant/bar that we wanted to go to; one that served fresh, clean, seasonal food that was affordable and played great music in a casual and fun atmosphere with friendly service. A place that was fun to work and patronize, which treated everyone with respect and love, mindful of procurement, waste, energy, and the community behind it.”

The Tamirs grew up in Israel and their work on a farm once a week when they were younger serves as a key influence on their food philosophy. “We would go foraging with our parents every weekend,” she said. The concept of sustainability was not as in vogue as today 11 years ago when the restaurant was taking shape. “There was not much interest in circular economy or sustainability,” said Tamir. “Working in the hospitality industry in New York, we found a huge disconnect and we wanted to be a healthy and healing part of the food system,” she added. “However, in the past five or six years, there has been a (positive) shift and there is a spotlight on Lighthouse and what we do.”

Some of the ways that the restaurant exemplifies these practices includes procuring food from local farmers, including meat, poultry, dairy, and vegetables (Only a few of Lighthouse’s ingredients are not local. For example, the restaurant has citrus and avocado year round), using green cleaning supplies, and serving organic wines and craft beers. The restaurant’s menu is seasonal, it employs reusable containers for delivery and takeout, uses green energy and water conservation, and allocates fair wages for staff.

Food inclusivity in relation to its customers’ dietary needs is also an important component that goes into Lighthouse’s menu. “We put a lot of effort into creating a menu that accommodates all allergies and diets. It’s important for us to give diners options without making them feel apologetic for their constrictions and preferences,” said Tamir.

Some of Lighthouse’s popular menu items include mezze with house-made sourdough bread and grass-fed cheeseburger. “The big salad, ceviche, each season has a variety of plant-based vegetables that make carnivores happy as well,” she said. The restaurant’s cocktail list is also seasonal, with Summer Sangria and Summer Crush (gin, watermelon, lemon, and bubbles) being the current season’s favored drinks.