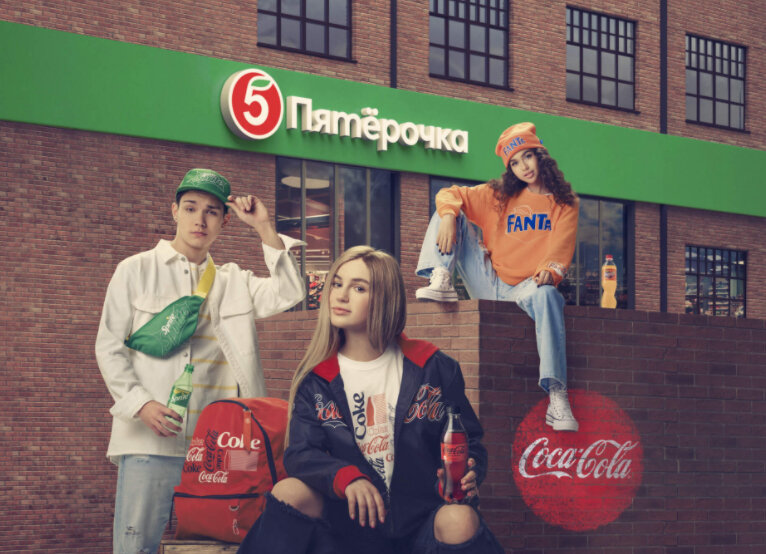 It’s encouraging to see larger companies getting involved in the sustainable clothing business, particularly when recognizable names team up and offer novel ways of getting the word out about living in harmony with the planet. One exciting example of this phenomenon is a new partnership between Russian retailer Pyaterochka and The Coca-Cola Company. These two giants recently came together to create a limited-edition line of colorful and fun street wear made entirely of recycled materials— including Coca-Cola bottles – and feature recognizable logos from popular Coca-Cola product lines, including Sprite, Fanta, and the classic Coca-Cola. The project’s slogan is, “Outstanding Taste,” and the product lines are consistent with the style of each product.

The partnership has also developed creative new approaches to increasing consumer interest in this sustainable collection. First, when Pyaterochka shoppers purchase Coca-Cola drinks, they receive points that can be redeemed for items from the new fashion line. There are other prizes that can be won, as well, including the grand prize – an eco-tour of the Russian region of Altai, a mountainous region on Russia’s southern border with Nepal and Mongolia, which is dotted with lakes and popular with hikers and campers.

The streetwear line is aimed at younger shoppers, so the companies are taking advantage of the popularity of Instagram among this age group. They have created an Instagram “GIF pack,” which allows potential customers to “try on” items from this innovative clothing line before they buy. In doing so, they are also helping shoppers avoid unnecessary trips. Oleg Mamaev, Marketing Director at The Coca-Cola Company in Russia explains, “With our streetwear collection of flashy, trendy clothing, we are primarily targeting our younger consumers, while encouraging everyone to protect the environment. It features various styles of clothing within a single concept: the Sprite line features street-style items, the Fanta collection is more casual, and Coca-Cola goes back to the classics. The full collection contains something for everyone.”

The companies are taking advantage of the launch, using the moment to host educational meetups at St. Petersburg and Moscow-based universities. Guest speakers will discuss different aspects of eco-friendly living, including: waste sorting, recycling, and sustainable fashion. Popular Russian bloggers will also be in attendance to take part in the meetups and promote the campaign, in the hopes that the conversation can continue online.

With this project, Pyaterochka and The Coca-Cola Company hope to send the message that “single use” plastics can have a second life. The project will be available through October..

Pyaterochka is a chain of retail stores in Russia, and is part of leading Russian retail company X5 Group, which also includes Perekryostok and Karusel retail chains. As of June 30, 2021 the chain operates 17,268 Pyaterochka stores across 66 regions in Russia. Find them here.